The Acts of The Lords of Rannick, LXI

This image appears with no explanation in the Module. Pretty rad though, right? Apparently it is the Oliphaunt of Jandelay, a massive creature summoned by the supporters of Alaznist to destroy the armies of Pride.

Having put down Highlady Athroxis, and then looted her tattoo and worldly possessions, everyone was very tired. I would say fatigued, but that’s a game term and they weren’t Fatigued. I remember running into that problem early on, which is that if you are too verbose in your descriptions you start trampling on game concepts.

“When the last orc falls there is a deafening silence…”

“But I’m immune to deafness!”

“If I’m silenced I can’t cast spells, this game is broken.”

Anyway, lulled to slumber by… the ceiling of roiling flame and the clanging of the perpetual alarm and the floor covered in blood… they shoved bits of cloth in their ears to keep the sound out while Halvard stood watch for most of the night. That ring of sustenance should really be named ring of pulling the short straw, but Halvard seems happy enough to do it. Well, not happy. Grimly satisfied may be more in Halvard’s domain.

After rest, they mapped out what they knew about the portals they had encountered so far in the Halls of Wrath and their diagramming revealed that there as one out portal to investigate yet. The research team also concluded that the large portal circle here was for pulling demons in from the nether regions (not by the nether regions) but also changed any teleport spell cast within its bounds to create a gate to a fixed location. The research team was pretty certain that location was near the entrance to Runeforge.

Tracking down that last portal, the gnomes jumped through first before anyone really had a chance to say “No, gnomes, wait!” which really should be incorporated into Dagfinn’s songs by now.

The gnomes found a room full of warriors of wrath busily dissecting sinspawn in a room containing tables, alchemical equipment and a huge vat of bubbling protoflesh. Also, the source of the clanging alarm that had begun when the Iron Archer Golem attacked them… another Iron Archer Golem.

Kerplak pressed Escape and shot up to the ceiling, Tersplink cast Confusion, leapt onto the Out portal and back to his companions to warn them. Two by two the party travelled through the portal to engage these foes who were, it should be pointed out, not actually hurting anyone.

That didn’t last long: they began launching fireballs and scorching rays at the party and the Iron Golem started shooting them as they approached him. Halvard cast a spell that made him grow larger – easy ladies, he’s married – and strode forward to exchange damage with the Golem. Dagfinn stepped into the center of the room and Shout’ed the warrior/mages. Ron and Arradin engaged the Golem too and Kerplak shot glitter out of his butt. True story. Tersplink came back to assist as the chaps he had confused began attacking their fellows/Dagfinn but just as Dagfinn became surrounded by foes, Albedon came through the portal and KILLED EVERYONE.

Every remaining Warrior of Wrath was electrocuted by the Chain Lightning spell Albedon cast. If none of them had saved (and few did, my rolling was appalling) it would have killed them even if they had been on full hit points. As it was – Zzzorp – they all rode the lightning hard enough to kill them all. Which left the magic resistant Golem to duke things out with the wall of Arradin, Halvard and Ron and it didn’t take long for them to pile on ridiculous amounts of damage, some of which hurt the Golem.

The next time an Adamantine weapon drops, I’m going to change the name to Golem-fucker, because the damage reduction was very effective against the party’s current weapon load. -15 points off of every hit? That’s harsh.

That’s a good number to know for your weapon and may make a lowly +1 Adamantine Warhammer a much more attractive prospect as a back-up weapon. There is only going to be more DR from here on in.

Anyway, they did it the hard way, smothering him with blows until he just gave up and the thick metal lumps that made up his body fell to the ground. The alarm, mercifully, stopped.

From there they decided to go pay Delvahine a visit. When they had last talked with Delvahine, she had given them a bit of background, and was clearly not interested in the return of any of the Runelords. She was more concerned to make sure she was able to return to the plane full of souls to be seduced. Trapped in a dungeon full of people who have succumbed to sin is less than ideal for someone who likes to initiate the succumbing. Speaking of which, they were met in the Cathedral of Lust by Delvahine’s newest offspring the fire-haired Alu-demons that Albedon evidently provided the …ahem… genetic material to create.

The party went in with no real plan as evidenced by them standing talking about what their plan should be while also talking to Delvahine. Delvahine was, naturally, still interested in finding a way out of Runeforge and was delighted when they told her they had found one. Less delighted when they refused to disclose its location. They also needed one of her… toys. Vraxeris’ notes had indicated that objects saturated in Pride and Lust would be able to form a weapon against which Karzoug’s magic had no defense – Illusion and Enchantment being his magical blind-spots. Delvahine supported that goal, but wasn’t about to hand over all of her toys, so she gave them one a leather-wrapped, subtly-barbed sex toy of indeterminate use.

She also offered support in the form of her two Mapplethorpian plaything stone giants. The group jumped at the opportunity and though Ron was suspicious of her motives, saw no guile behind the move.

They headed with purpose and determination to the Hall of Sloth, which when you think about it, wouldn’t have helped at all. Nevertheless, they all made it through, with none of the odd time-space problems that they encountered with all of the other wings except Envy (which was broken about) and Gluttony (which they forgot about). Giants in tow they proceeded down the dim corridor which had not been kept as nice as the others and was filled with a thick mist. the mist almost immediately made everyone nauseous… whether it made them Nauseasted,… I’m not sure. Actually I’m pretty certain they all lost the lunches they haven’t been eating for almost a week. Like coughing up rabbit turds.

The giants were also sick …but not Sickened… but that was the least of their worries because Kerplak had decided to ride one, in accordance with everything we know about him. After coming to a t-junction, they arrived at another t-junction then another, then another. As they got deeper in, Halvard started marked junctions with his sword (the only way he marks things, really). When they encountered milky liquid that seemed to be seeping into the crumbling corridors, Kerplak waded in with his giant. Eventually they began encountering lifeforms, biting insects and spiders mostly, but eventually distant swarms of rats at the edge of vision in the mist.

One of the giants suggested that maybe the way to get into the Hall of Sloth was to sleep, so with everyone’s approval, he laid down and took a nap. Nothing particularly impressive happened except that he fell fast asleep. So asleep that they were unable to wake him when they had had enough of this bullshit and decided to walk back out. Heavens above! The junctions had all changed. They spent a considerable amount of time wandering from junction to junction, each one brand new, without Halvard’s markings.

Eventually, they made their way out – annoyed, dragging a sleeping giant and covered in horse fly bites. Halvard (goal oriented as always) thought they should quit fucking about and make some weapons-…

No sooner had he said that than the pool in the center of the hub began glowing brightly, illuminating the entire “hub area” and casting eerie light up at the faces of the giant statues of the Runelords that surrounded the pool. A fine sparkling mist rose above the liquid, sending out tendrils towards the shards of mirrors from the Shimmering Veils of Pride and the phallic plaything from the Cathedral of Lust. Dagfinn volunteered to approach the pool and slid Flame Tongue beneath the surface of the liquid after the two component items were immersed. The glow flared becoming so bright that it filled their vision. and that was when the hallucinating started.

Albedon and Halvard were filled with visions from their past – of falling to foes and the impotent fury that burned in them as they were bested. Albedon saw visions of Longtooth, and the red dragons he had pre-peremptorily attacked under Jorgenfist. Halvard…was spolied for choice for visions of people he has been furious with.

Kerplak had different visions – crouching over a treasure chest in a waterfall cave in the fey realm, attempting to shield it from view so that he could plunder the choicest items and the tremendous fun he had tinkering with the grenade launcher and in the transmuter’s workshops.

His cousin, meanwhile, was reveling in how amusing it is to make people do stuff – Confusion, Hideous Laughter – all such sources of delight for him, watching bigger, more martially imposing beings reduced to his playthings. Dance puppets, dance!. Whether or not actual mustache twirling occured, I don’t know.

Lastly Dagfinn, who was arguably hallucinating the hardest and longest was replaying scenes in his mind: the sting of injustice when he heard Fort Rannick had been given to Lonny’s Stewardship and how much it bridled to have Lonny deny him the right to build his tavern. And he remembered every time he has boasted – to town guards, adversaries of all types, to the Shoanti outside Rimeskull, to Delvahine only a few hours ago – he can only ever boast by incorporating a put-down of some sort; Dagfinn builds himself up by pulling others down. Superficially it might look like Pride, but Dagfinn is steeped in Envy because people don’t respect what he does for this party!

3 points of that hit was his dammit. Would it kill you to say thank you?

Things might be about to change for Dagfinn, however, because when he pulled his sword out of the pool, it had become a Domineering Flame Tongue and the urge to command others began to seep from the sword to its owner. The blade flared with light and the pool dimmed.

Arradin and Ron, two beings who had made peace with their character flaws to some degree were not bothered by flashbacks, were the only ones to notice the head of the Karzoug statue slowly turn in their direction. 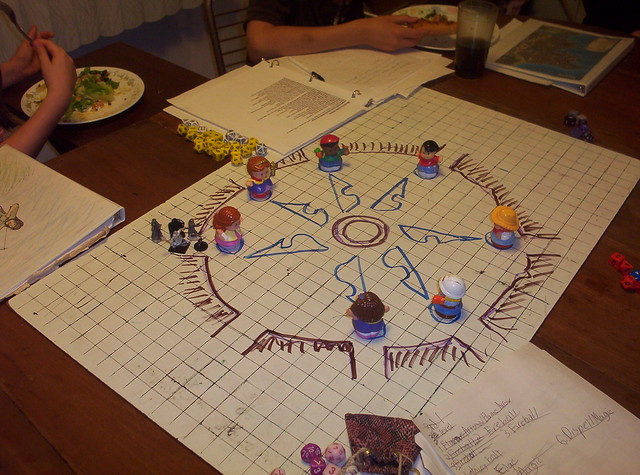 ← Some suggestions from your Scottish bretheren
Faces of the Great One →