Somebody else paint something! 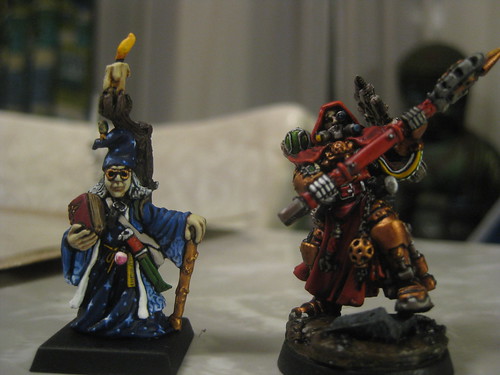 Before I put my paints away ahead of Thursday night, I thought I’d post what I finished last. On the right and largely out of focus – he is what one might call an “actively posed’ miniature – is my Techpriest. He has been on the cusp of being finished for a while, so I endeavoured to get him done and varnished. I was quite pleased with how the dirty red and the bronze armour were looking and I didn’t want it getting chipped further while it languished. So now it is done and varnished and i don’t have to worry about him any more. He makes a nice fluffy leader for my Forgeworld-aligned Guard army.

On the left is a daft wee miniature that I’ve had for donkeys; I think he came as a package because I have two more that are of the same scale and GW era and all three have some sort of odd, anachronistic tool on them. One has a calculator, the other a stopwatch, this one a measuring tape. I actually enjoyed his colour scheme, I think blue is a nice colour to paint in – not so hard to layer like red, not so hard to see like green. 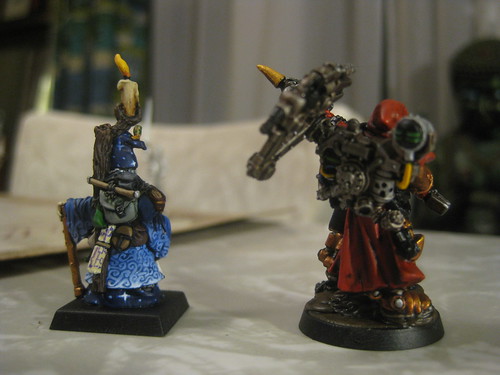 The reverse shows why I wanted to paint him – he was wearing long robes. I’ve been enjoying the art in the Pathfinder books ( I should, since that is what I really pay $50 for…) especially the art of Wayne Reynolds. I like the treatment he gives fabrics – they’re not monochrome which I like because historically most clothing wasn’t. Completely plain unembroidered cloth was for poor people. if you had anything about you at all, you’d get some nice patterned stuff and get a tailor to make breeches out of it. You can see what I mean here in the WR painting of Lem, Pathfinder’s “iconic” Bard. Striped trousers, embroidered cloak, tooled or studded leatherwork, patterned cummerbund; the little guy has it going on. This isn’t to say that I’ll be embroidering the shit out of every miniature I paint, but if i can fit something into an existing colour scheme without making it too busy, I think it adds quite a bit of character to the piece. 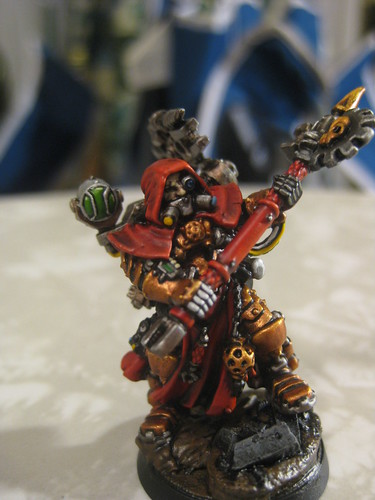 A better shot of the front of the Techpriest. I didn’t put much effort into it, but I’m really happy with how that shoulderlamp turned out.  I also kind of like the tiny amount of skin left on this guy. I think the bronze armour looks quite nice.

I’m dicking around more with coloured armour now, seeing if I can make a suit of bluish plate mail. We’ll see.  I’m also intrigued by the late-renaissance feel of the brass-engraved armour technique that GW wrote up for painting Empire armour.

← The Acts of the Lords of Rannick, IX
In defense of BoLS →

2 Comments on “Somebody else paint something!”