The Acts of the Lords of Rannick, IX

The only hopeful bit of information that the frightened townsfolk of Wartle could give the party before setting off was that a Druid named Devarre lived to the north, somewhere. Being a druid, he wasn’t too interested in the town and the town’s rangers ran into him every once in a while. If anyone knew what was going on in the southern Sanos Forest, it would be Devarre. They could point the party in the general direction of Devarre, but after that, they’d have to be found by the druid. After getting their fancy clothes off and their business armour on, they set off into the gloom.

The fog was dense and their way north hampered by bramble patches that had sprung up across established paths and trails, but Torgor, was able to guide them North. The going was slow – although the druid’s home was a mere 30 miles as the crow flies, it would take the better part of two days to get there with the mist and the brambles in the way.

The group made camp in a stand of oak trees, arranging watches and bedding down for an uneasy night. The first watch passed without incident. The second watch was similarly without incident, but that’s mostly because the pair assigned guard duties nodded off intermittently; if anything happened, no-one knows about it. Finally, Arradin took the last watch of the day, all by herself. As she watched over her sleeping comrades, a slender figure leapt out of the bark of one of the great oak trees. It darted across the clearing and then stumbled and fell. It was a terrified dryad, very badly wounded and exhausted. Arradin, hearing the dryad’s pleas for help but not quite knowing what to do woke Torgor, hoping the Ranger would have a better handle on such things. Torgor and Arradin attended to the Dryad who explained that dozens of Spriggans had overrun the grove of her sisters and were burning their bound trees. She gave them brief directions, but as she urged them to go to the aid of her sisters, she broke off mid-sentence, gave a little gasp and died.

I was going to post a picture of a Dryad here, but after a quick google search, I’m going to summarize what you’ll find: tits with leaves on them. Rule 34 is in full effect. Also, a search for “dead fey” reveals that some people really, really don’t like Tina Fey.

Rousing their comrades and getting ready for the day, they set off along the gully that the dying Dryad had told them would take them to the grove. Within a short time they saw the eerie flicker of a bonfire and heard a woman’s screams amid the harsh cackling of Spriggans. Stealth seemed like the favoured option of most of the party, but that doesn’t mean they could pull it off. Arradin clanked noisily up the slope to the bonfire, alerting the Spriggans to danger. Realising that surprise wasn’t necessarily going to be on their side, Arradin and the gnomish barbarian… it still feels weird writing that… Badonk rushed forth into a line of enlarged Spriggans. Kerplak was able to flank the Spriggans stealthily, catching them unawares with a well placed volley of crossbow bolts. Dagfinn started his Win Song (B-E-AGG-RESS-IVE!) and provided missile support along with Torgor who scored the sole critical of the night, putting an arrow through the wrist of the Spriggan advancing on him. Corwin didn’t manage a critical but he didn’t miss a single time; slow-but-steady spear damage.

Albedon, the new-guy Mage had the raging powers of the arcane at his fingertips, but elected to lowball it against what appeared to be fairly flimsy enemies. Lonny doesn’t do things that way and smote a Spriggan with the holy power of Torag, smote him right in the face. I think you’ve got to respect any deity whose divine interface with his enemies is the face of a hammer’s head. Arradin and Torgor picked up some poisoned wounds but before long the Spriggans were no more, the last of them cut down by Arradin as he tried to escape into the brambles on the edge of the clearing.

When the sap-gore had finally settled, Badonk, Arradin and Lonny assisted the remaining captive Dryad from her bonds while Corwin went to investigate the brambles. Beneath the thorny bush he found an unconscious and bound unicorn. That rather got everyone’s attention. Who doesn’t want to see a unicorn? After healing the unicorn back to consciousness, he – the unicorn – thanked them a great deal and relayed what he knew of the attack on the grove.

Although it never really comes out in the game... 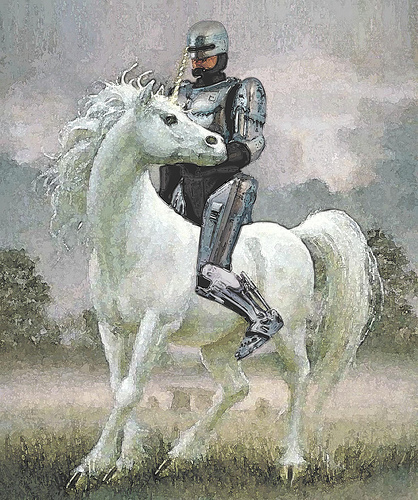 The Unicorn, Palombier, explained that he had arrived to late to prevent the Spriggans from swarming the grove and had been overcome by their numbers – there were forty or fifty when he arrived and they were already hacking at the dryad’s trees and building a bonfire. Kerplak found leftover logs around the fire with crudely carved images of the dryads who once inhabited the tree, made by the Spriggans. While Palombier was busy curing Torgor and Arradin of their poisoning and generally being majestic, Arradin assisted the Dryad.

The Dryad fetched from her hometree a bag of gifts given by various admirers over the years. She gave Arradin a flower and instructed her to blow the pollen of the flower when she reached Devarre’s hill, that would allow her to see past the protective spells that hid the place. In addition, the bag contained a pouch of dust, identified as a Dust of Dryness and a metric crapload of money and gems. The sisters had been well admired, it must be said.

Palombier took his majestic leave of the party, majestically going to warn the other fey denizens of the danger and teleporting majestically away. Fira the Dryad did the same, putting aside her grief so that she could warn others of the Spriggan attack.

The party moved on through the mist towards Devarre’s hill. Before reaching it however, the forest was disturbed by some heavy crashing noises and a large tree trunk fell out of the mist and landed in front of them. After a moment or two, it stood back up, swaying dangerously and opened a pair of bleary eyes at the party. The Treant, they surmised as he babbled on incoherently and largely ignored them, was fabulously drunk. He offered to fight them initially, smacking Dagfinn, but then got distracted trying to share his booze with them. Despite numerous attempts to catch his attention, nobody was particularly interesting enough to do so and Kerplak wasn’t nimble enough to climb him. They did take a few swigs of his booze however, Torgor plunging ahead first. Everyone could tolerate the potent brew except Dagfinn who became staggeringly drunk almost immediately. Still it gave the drinkers a spurt of growth and a toughening to their skin, so it didn’t seem all bad.

Arradin couldn’t get through to the drunken treant so she walked off into the mist, alone. Badonk tried to rig a simple tripline but as he did so, the Treant’s mood swung violently. He became suddenly enraged and commanded two nearby trees to smash the intruders. Roots tore from the ground as they advanced on the adventurers. And that’s where we left them…

← First useful Pathfinder app I’ve found
Somebody else paint something! →

One Comment on “The Acts of the Lords of Rannick, IX”