The Acts of the Lords of Rannick, LVIII

We didn’t finish the fight this week, so we’re going to roll straight into it next week. Thanks everyone who tried and reviewed a Spamball for me.

After examining the Shimmering Veils of Pride a little while longer, the party decided to camp out in there, rather than going back to the hub and being woken up by Dagfinn’s creepy Magic Mouth admirer. There may have been other reasons, defensible position and what not, but still… nobody likes that the ceiling talks to Dagfinn.

They set up camp and they spent some of the time leafing through the books contained in the little library that Vraxeris was stinking up with his corpse. Halvard also went digging for skulls in the bone pile, as is his right as a Cleric of Gorum. He tucked some neat looking identical skulls away for some obscure purpose of his own. Probably best not to ask.

They also talked a little about Vraxeris’ last notes before he just started scribbling and it became clear that everyone understood a little, but it didn’t really seem like anybody understood the whole thing. However, they understood that the shards of the mirrors from the Shimmering Veils were important components in the making of a Runeforged weapon, as were Delvahine’s dildoes and what-not. While they were pondering beating an age old tyrant to death with a shard-studded dildo, some of the more widely travelled folks also picked up on the reference to the Mhar Massif, which had become home to Xin-Shalast, City of Greed. Mhar Massif is the largest mountain in the world, somewhere northwest of the Storval Plateau.

Making their way back out to the hub, they had no real inclination to go down any particular hallway, so they chose the hall of Slo-… Wrath! That, after all *ahem* is where the only exit from Runeforge lies. THE ONLY EXIT!

They bunched up into a marching order and Dagfinn sang as they set forth into the hallway behind the huge statue of Alaznist. Halvard, Albedon, Ron and Tersplink made it through: Dagfinn, Kerplak and Torgor did not, finding themselves treading hallway again. Kerplak took another run at it, making it through on his second attempt, but Torgor and Dagfinn took a bit to get through to the other side.

On the other side, the first through found themselves in a very tall, well lit hall. On the far wall a mural of a red-haired woman riding a red dragon covered the marble. On the same wall a hallway continued, 30′ up the wall, with a pillar? … a buttress? I’m having a hard time thinking of how to describe it,.. basically a 30′ high square stone pillar that formed the end of the floor of the corridor above. This also held a large iron statue, hulkingly manlike in shape, albeit with a clublike fist. 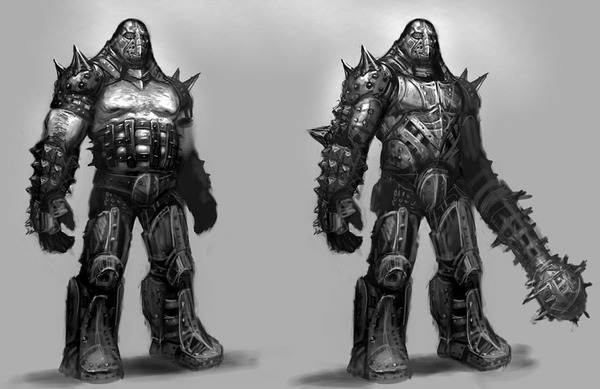 Yeah, that guy on the right looks pretty close.

As Ron, Halvard and Albedon approached, the statue animated. It levelled his fist at them and three bolts of fire spat out at them. Albedon, feeling strangely excited to be in this wing of the Runeforge immediately lashed out with a Lightning Bolt and while it was one of his best Lightning Bolts, it passed around the Iron Golem causing no obvious effect. As Ron and Halvard approached, Halvard cast Obscuring Mist (right?) preventing the Golem from taking more potshots at them. Halvard also had Fly cast on him and then Displacement by Tersplink who – upon seeing the absence of effect when the Iron Golem was targetted by spells –  worked tirelessly to buff the shit out of the party, landing Flys, Cat’s Grace, Bull Strength as he delegated the difficult business of crushing his enemies to his friends. He was in the background for most of this fight, but that didn’t mean he wasn’t active.

Meanwhile, the Golem had emerged from the mist, floating sideways gracefully through the air, the soles of his boot-like feet aglow with an orange light. Halvard, like Albedon, was feeling pretty great being here, feeling at home, feeling ready to beat a statue up. He called down the power of Gorum, but to little avail and wound up hitting himself in the face with his greatsword. Ron wasn’t initially phased by the statue’s altitude either, leaping up to hit it, Monk-style. Eventually he got a Fly, but not before he had attempted to grapple the Golem’s shooting arm and make it shoot itself. The Golem turned the tables quickly, then dropped Ron.

Around this time, everyone else had showed up. Kerplak had used his new toy, the Cape of the Mountebank to teleport up to behind where the Golem had started off and found himself in a hallway that terminated in a room with two rune circles on the floor. He downed a Fly potion and then got into a position to shoot at the Golem.

Torgor found his range and then scored probably the only hit of the evening that seemed to have a big impact on the Golem, causing it to reel for just a second. He kept the shots up, hitting fairly often.

The Golem meanwhile traded blows with Halvard, Dagfinn and Ron, with Albedon and Terplink’s offensive capabilities useless against the thing. The crushing slams of the Golem brought Halvard down, but it wasn’t able to push it’s advantage because its attention was taken by Kerplak doing something terrible.

Having grown bored of not being able to do much against the Golem, Kerplak continued down the hallway to the rune circles on the floor. Figuring that they may be some sort of OFF switch, he dug out a vial of the silvery liquid that he had taken from the Halls of Eager Striving and dropped it on the rune circle. Sure enough, the bright red glow that had infused the tiles that made up the circle died. The Golem did not. It did, however, turn and immediately make its way towards the gnome. Albedon rushed to the gnome too, perhaps with a similar sense of alarm that the gnome was randomly deactivating magic stuff without adult supervision.

Albedon ascertained that the deactivated rune circle was a receiving portal and the yet active circle was a sending portal. Presumably they connected to some other place, but it was logical to assume that once you went to that place, Kerplak had just killed the way you’d get back from there.

Since it had become so late, we called it right there and we’ll pick it up next week.

Sean picked up the Compleat Adventurer this week for the oldest reason it has ever been awarded – cracking everyone’s shit up. Honestly,.. turfplum.